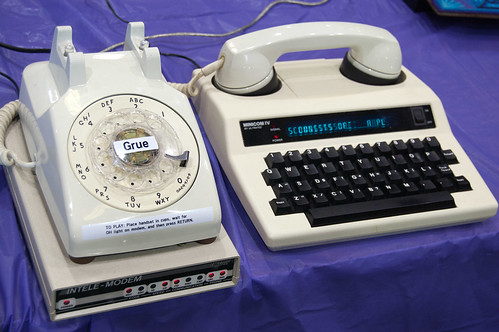 If you’re like me, one of your first computer game experiences was with an interactive fiction text-based game.  Zork was probably the most popular, but I discovered the Hitchhiker’s Guide to the Galaxy game first (before I knew it was a book.)  In fact, I had never played Zork until quite recently when I encountered a version of it on Frotz, which I discovered as an iPhone application.  Within Frotz, one can play a wide variety of text-based adventure games.

If you’ve never played one of these games, there really isn’t much to learn.  Players are typically presented with a description of their character’s surroundings followed by a prompt.  Players can type simple directions at the prompt, such as “go north” or “pickup phone.” This process repeats with the game presenting the results of the previous command or a description of the new scene if the player has moved.  From there, the player enters further directions, and the game continues.

Obviously, the focus of the game is the writing as there are typically no graphics involved.  These games also have a rich tradition of Easter Eggs and snarky responses, particularly when commands are malformed or not recognized.  As the player proceeds through the game, objects can be collected (such as a key) that can later be used to solve a problem or make progress through the game (such as unlocking a door.)

These games are now rediscoverable thanks to new technologies.  Not only that, but it has also become very easy to create a game with virtually zero programming involved.  Two examples of tools that can be used to create interactive fiction are Twine and Inform7.

Inform7 is much more complex, but the results are actual interactive text-based adventure games.  Elements can be dragged and dropped to create the relationships that form the basis of the story.  Examples of some of the best interactive text adventures can be found in this article on makeuseof.com.

I haven’t used either of these tools yet, but I’m curious about what ESL students might make of them (and make with them).  The process of writing can be a challenge in itself and, if they are not familiar with interactive fiction, explaining it would be an additional difficulty.  But by collaborating in small groups, there might be some interesting possibilities for collaborating and giving peer feedback.  At the very least, interactive text adventure games can provide ESL students with a rich source of input.  And because the syntax for interacting with the game is so simplified, even intermediate level learners can play them.

I plan to give Inform7 a try to see how easy it is to use.  If you’ve used it, or know of other similar tools, leave a comment.