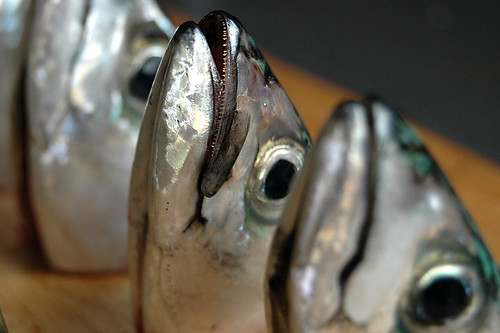 “Ever notice how the Fishheads song sounds kind of like Phantom of the Opera?”  Um, no, I hadn’t, but when Greg, whose desk is not far from mine asked me this question, I became curious.  I hummed each tune and I had to admit there were some similarities.

I opened a YouTube clip of each song (Fishheads and Music of the Night from Phantom of the Opera) and after a quick listen, I also thought there were some parallels that warranted further investigation.  I also found that I could play the Fishheads song, then switch over to another tab in my browser and watch the Phantom clip on mute, thus integrating the audio from one with the video from another.  Interesting.  And, when the Phantom’s mouth movements happened to sync to the Fishheads lyrics, pretty funny.  But, could I capture this hilarity for others to enjoy?  Enter Screenr.

Screenr is an online screen capture service that I’d seen but never used before.  Turns out it couldn’t be easier.  Go to Screenr.com, click on the “Launch Screen Recorder Now!” button, and drag the red rectangle over the part of your screen that you want to record.  From there, just click record for up to 5 minutes of free video.  It was a bit tricky for me to sync the start of the video and audio to the start of the recording, and I had to adjust the volume level so that the recording was not too loud, but after a couple of tries I managed to work it out pretty well.  See for yourself.

Unfortunately, WordPress, which this blog is built in, does not currently provide a way to embed Screenr content.  I should also be able to upload the video to YouTube from Screenr, but that feature isn’t working for me.  So, instead of embedding the video in my blog, you’ll just have to follow the link.

So, that’s how I turned an office distraction (no offense, Greg!) into an opportunity to try out a technology I’ve been meaning to check out.  And, I’m pleased to report, Screenr was extremely easy to use on the fly without practice or instructions.

Can this become a project for your classroom?  Perhaps.  It might be very interesting to ask students to create a Screenr video that combines the audio from one video and the video from another.  Because Screenr is web / browser based, there are very few editing options other than “record” and “stop,” but this simplicity can really flatten out the learning curve.  It would be interesting to have students present and discuss their mashups.  But, please, no Wizard of Oz vs. Pink Floyd.

4 responses to “Mashups in Minutes”